As evidenced by this headline, that tour with Rise Against, Killswitch Engage and letlive. was not a hoax. It happened Tuesday night at the Masonic Center in San Francisco and I know for a fact that it did, because I saw it with mine own two eyes. I went to the second Tuesday night concert of my life with a couple friends and here’s what I got to report.

The stained glass window of the Masonic foyer. Photo by me.

The Masonic Center is an absolutely breathtaking work of architecture, and before you ask; yes, it has everything to do with those Masons. It’s awfully cool of them to let people use it for concerts, which are managed via Live Nation. The foyer is massive and the theater itself is reasonably spacious. The dance floor by the stage has plenty of room and is relatively easy to get in and out of even when it fills up. Towards the back, there are rails (with flat surfaces to set food and beverages on) to lean on and chairs to sit in. These spots are prime real estate, so be sure to hang onto them if you ever attend a show here. Being a general admission ticket holder, I didn’t get to see the balcony, but it looked comfortable.

Not that this venue isn’t without flaws. Getting yourself out of the parking garage kind of sucks and getting a wristband for floor level and alcohol requires three or four different ticket/ID checks. Nice venue also means unreasonably expensive drinks; my vodka soda (I’m dieting) cost nine bucks and that’s just the well version. Getting some Ketel One in there bumps it up to 12. I suppose that’s pretty normal for a city establishment, but it still sucks. 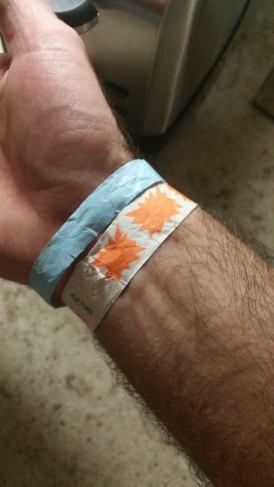 Two wristbands, because you can never have enough wrist hair irritation. Photo by me.

There was a variety of people here, but spotting the metalheads was easy as hell. They, like me, had come to see Killswitch Engage. They probably neither knew nor cared at all about Rise Against. These folks were easy enough to spot; if someone was wearing a band shirt (I saw Korn, As I Lay Dying, Lamb of God and, weirdly enough, Dream Theater) then they were probably going to head home as soon as KSE stepped off stage and sure enough, a bunch of these guys and gals disappeared once that happened.

My friends and I established our spot right behind the main floor when the first act came on. Letlive. is probably the closest you will ever come to seeing a band fronted by the Joker (the “Why so serious?” variety). The LA-based post-hardcore five piece is worth watching just to see the antics of their shaggy, lanky vocalist, Jason Butler. This dude is constantly on the move, splashing the crowd with water bottles, standing on top of things he probably shouldn’t be standing on (like speakers), tossing his mic into the air and moon walking. And holy shit, Butler can moon walk; that was probably the highlight of letlive.’s set. That and his panicking roadies, all with that “Oh my God, what’s he doing now?” expression etched into their faces, trying to contain Butler’s chaos. I went down into the crowd once to participate in a circle pit, which is always dangerously fun and letlive. finished up with “27 Club.” Butler launched himself offstage and into the crowd on that last song.

Killswitch Engage doing their thing. Photo by me.

That was fun and lively, but I couldn’t wait for the guys I had paid quite a bit of money to see take the stage. After some the sound check, the house lights dimmed and I readied myself. Five minutes of build-up later, “Turn Down for What” started piping through the speakers, much to my surprise and amusement. After this kind of hilarious false start, KSE took the stage and launched into their set with “My Curse.” It rocked, but the crowd remained static throughout the song. Thankfully, lead guitarist/backing vocalist/producer/madman Adam Dutkiewicz (known as Adam D) had some choice words to get the Masonic fired up

“What is this, National Menstruation Day?!” he demanded. “Clean your pussies up and open up this fucking mosh pit!”

We did not require further encouragement; as KSE launched into “Rose of Sharyn,” I made my way to the center of the floor for some good old fashioned Tuesday night moshing. These guys are a top five favorite of mine, so I wanted to be as close to the action as possible. I remained here for the entirety of the set, dodging some huge dude who had to be a decade older than me, avoiding the guy with the dreadlocks and the Lamb of God shirt (he looked dangerous), taking little breaks on the edge to catch my breath and generally having the greatest Tuesday night ever. I even got to hear that new KSE song that they’ve been playing live lately, “Strength of the Mind.”

“This song is about dealing with anxiety and depression,” announced frontman Jesse Leach, before it came on.

I know how that feels, I thought.

“And about dealing with wicked huge boners!” added Adam D.

KSE rounded out their set list with songs from their most recent record, 2013’s Disarm the Descent, mixed in with old favorites such as “Life to Lifeless,” “My Last Serenade,” “A Bid Farewell,” and “This is Absolution.” At one point Adam D even got off stage and ran around the theater, still strapped into his guitar. They ended on the classic “The End of Heartache.” According to Adam D:

“This song is about eating Pussy! Always and forever! Amen!”

Rise Against at the Masonic. Photo by me.

For a second there, I thought that was pretty much it. I didn’t see how Rise Against was going to top KSE. Under normal circumstances, I might have just left the show there, but I was determined to stick the night out At any rate, it would give me more to write about, which would actually make sense if I got paid per page (or at all, for that matter). It took a long time for RA to come on; long enough for me to endure the considerable merch line to pick up a sweet KSE t-shirt. I swear RA’s sound check took longer than letlive.’s entire set.

My bitching new Killswitch Engage t-shirt. Photo by me.

I want to say it was nine o’clock by the time those Chicago hippies hit the stage. The floor was packed at this time. As I mentioned earlier, the metalheads has gone home, leaving everyone else. I went back to my spot with my friends, completely moshed out. I was quite sweaty by then, and the unpleasant aroma coming off me practically ensured we didn’t lose our standing space. RA opened up with “Satellite,” and I was shocked at how into it everyone was. I mentioned before that I’m not overly fond of these guys, but the crowd went wild and the mosh continued unabated. If anything, it was even more frenzied that it had been for the much heavier KSE. It was understandable, in retrospect. RA was the headliner and is a much more popular band, with a sound that can cross over into radio rock that is more palatable to the masses. These guys also are rooted in punk, which did invent the mosh pit (metal co-opted it a long way back). While they’re far from my favorite, frontman Tim McIlrath and lead guitarist Zach Blair know how to shred, and really, what more can you ask of guitar-driven music?

Halfway through RA’s set it dawned on me that they were okay and while I didn’t have to love them, they at least had my respect. They were on stage for well over an hour before they did that thing were a band pretends to close up shop only to be called back for the encore by the crowd. The encore comprised four songs, which is one more than is acceptable for an encore, but I let it slide. Curiously, the first two songs were acoustic, which is something I’ve never seen in an encore. Thankfully, McIlrath realized it would be super lame to end the show on “Swing Life Away,” so RA put forth two more heavy tracks, the last of which is the mega popular “Savior.” Then it was curtains for good.

My friends and I booked it out of the theater back to the parking garage and made it out in a timely manner. It was 11:20 by the time I made it home to San Rafael and work the next day was more taxing than it usually is. By I didn’t care; I got to go in a mosh pit on a Tuesday. Letlive. was electrifying. Killswitch Engage killed it. And you know what? You’re okay Rise Against.