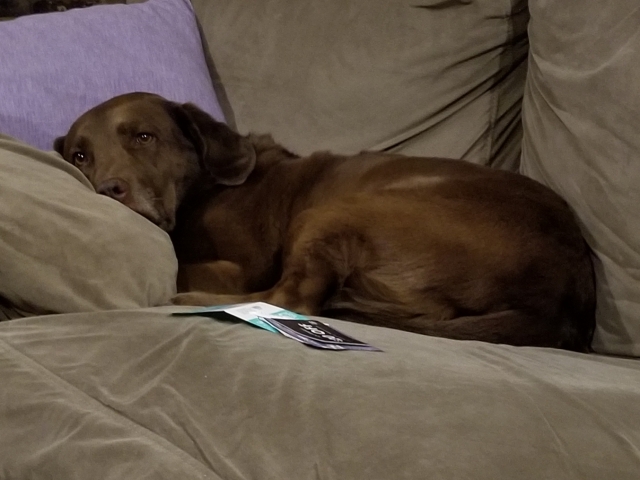 One of my roommates being a couch potato. Photo by me.

My roommates recently made the decision to cut our cable without consulting me. Far from being mad about it, I felt a tremendous sense of relief. On top of all the stuff I watch on streaming services, there are roughly three to five network TV shows that I follow throughout the year and I try to be a good American by watching at least some football. But as you get older, you can’t help but to notice how little time you actually have outside of your various commitments (kids, jobs, grad school, etc). This has slowly dawned on me for the past five years and it has led me to this very unpleasant conclusion: watching more than two shows at a time is basically a second job you don’t get paid for.

Things are going to get very “first world problems” going forward, so buckle up.

In 2010, The Dillinger Escape Plan released their fourth studio album, Option Paralysis. Whether intentional or not, its title essentially foretold the entertainment landscape of the decade that followed, which will almost certainly continue until the end of time. I call this a “problem” only because I don’t know what else to call it: there is too goddamned much entertainment. There’s a million shows on every streaming platform. Network TV is still putting up a valiant fight and some channels – CBS and CW come to mind – are basically trying to be streaming platforms. You like books and comics? The barriers to publishing are lower than ever (and to be clear, that is largely a good thing) and you have access to far more options than there were just 10 years ago. Music has been taking a similar route. And while I’m glad that the video game industry still caters to people who are only interested in single player, every single player title that gets put out now is a 100 hour commitment at least.

A few years back I tried to do a complete, front-to-back re-watch of the entire DC Animated Universe and it fell apart miserably around Justice League Unlimited. The odds of me ever sitting down to watch an all time classic series like Breaking Bad or Mad Men is slightly less than zero. I’ve been sitting on an Amazon Prime membership for several years now and haven’t the slightest interest in watching The Boys or Jack Ryan (though I might crack and cave in once that Lord of the Rings show comes around). I somehow manage to drag myself to the gym three or four times a week despite strongly disliking excercise but I begrudgingly see the necessity of it. Spending more than a couple hours a day watching TV is much harder to justify (please don’t “OK, boomer” me).

It feels more manageable to only follow one or two streaming shows at a time and it helps that I’ve been gradually losing interest in the Arrowverse and every other network show I’ve watched. I’m not sure how I’ll watch football but there’s the rest of the year to figure that out. Life is too short to waste on mediocre TV. As far as I’m concerned, Avatar: The Last Airbender is already the best show ever made and everyone else is just competing for second place. And even then, they’ll probably have to settle for third because I’m certain that The Venture Bros. will be the second best show ever once it wraps up.

It’s still too early to tell how our new cable-less life will effect my weekly productivity. I’m feeling cautiously optimistic; maybe I’ll have time to write more? I dunno, I better go stare off into space and think about it some more…