The Hillary Step had four and a half stars on Google. It was open on Mondays, Tuesdays, Thursdays and Fridays but not on Wednesdays or weekends. This screenshot and all the subsequent ones were captured from my phone.

Living with a baby means that sleep is occasionally hard to come by. She’s not my kid so I don’t actually have to partake in the raising process (thank Christ) but it can still be pretty rough. One of my favorite activities is Googling stuff and I’m especially prone to this when I’m feeling half awake. So one morning after a particularly restless night, I decided to Google Mount Everest’s famed Hillary Step, the 39 foot tall rock face which was the final obstacle climbers had to traverse before reaching the summit. Due to an earthquake that hit Nepal in 2015, the step is no longer with us but thankfully we have some amazing troll reviews on Google that will help us remember it for all eternity.

As expected, there’s a reference to a certain Everest book you may have heard of. Kidding aside, it’s a terrific read that holds up well 21 years later. Check it out if you haven’t already.

Faux restaurant ratings are pretty common with these troll reviews. The highlight here is Jack Rollet Chhetri, since everything he’s saying is technically accurate; especially regarding his fifth point.

Liam Keating had me at “pro mountain critic:”

This one appears to have been written by Dr. Steve Brule. I must have missed the Everest edition of Check It Out! 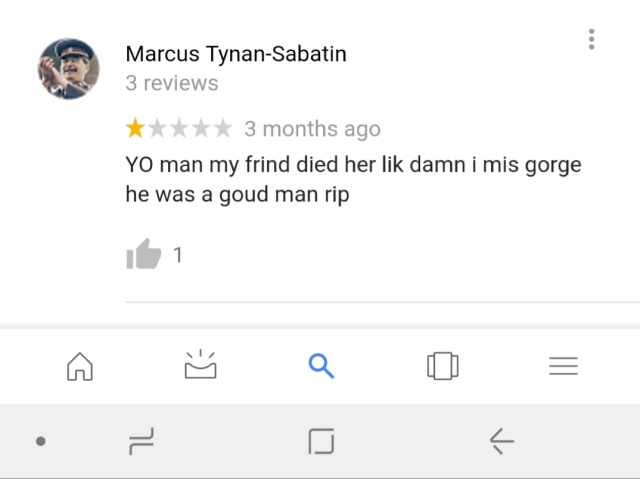 This Google search was an extremely productive case of doing nothing at all. I hope there’s many more in my lifetime.